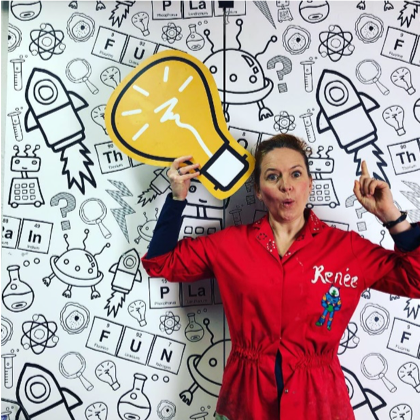 Renee is a Queanbeyan girl, who has always been excited about the world, understanding it and sharing the joy of science with everyone. St Clare’s provided a great environment for that enthusiasm to turn into a real passion. She was Wibalu Captain in her final year at St Clare’s before heading to ANU to study Biochemistry. It wasn’t all smooth sailing, with a family divorce making life tough for most of year 12 and first year at University but with the support of some brilliant teachers and friends she made it through. While in her 3rd year at ANU Renee undertook her first science engagement project, working with Canberra Hospital mortuary to create a museum of body parts for educational purposes.

In 2000, Renee decided to take a year out and set off on a round-the-world adventure.  After some amazing experiences and some close shaves, she found herself in London working for the first National Patient Safety Agency.

In 2001, Renee moved to start a new role, at the University of Oxford, establishing the National Translational Cancer Research Network and in 2005 was seconded to help launch an international Malaria Research Network.

Following the birth of her first child in 2006, Renee decided to strike out on her own and launched her first company. WATS.ON continues to support scientific societies to grow and begin making broad social impact. One such organisation was the Oxfordshire Science Festival, which, under Renee’s leadership, grew to over 100 events attracting 30,000+ people.

In 2016, Renee started her second business, The Curiosity Box, which sends boxes of fun, hands-on science experiments to kids on subscription. In 2017, Curiosity Box won an Innovation and the WISE Toy of the Year Award; Renee won the Spotlight on STEM Role Model award and was a finalist in the The Women in Business Director of the Year and IoD Startup Director of the Year in 2018 and 2019. In 2018, Renee was named as 1 of 6 women in STEM to watch by Melinda Gates.

Renee has set a goal of giving 1 million children a wonder-filled experience of science and is hosting an event at Westminster in 2019 to begin her campaign to make science education fun. Renee refuels her batteries playing touch rugby and is very excited to be representing Europe at the Touch World Cup in Malaysia in May.