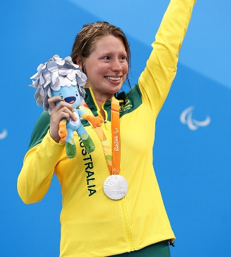 Monique Murphy graduated St Clare’s in 2011 as a proud member of Kipara House. Monique remembers her seven years at St Clare’s of smelling like chlorine and compiling days off to compete as a swimmer. The end of 2011 saw Monique leave her swimming dreams behind and move to Melbourne to study.

Three weeks into her Bachelor of Social Work, Monique was involved in accident from a suspected spiked drink. After she woke from a week long coma she leant that she had had fallen from a fifth floor balcony. Along with eight surgeries Monique ultimately had her right leg amputated below the knee. Years later Monique still have no recollection of that night. To call it life changing would be an understatement, and the tears, struggles and grief for her former life and body are emotions that can still cross her today.

However Monique had two life lines during this time. First of all her family and friends and second swimming. Monique’s family were at her bedside from the moment she woke, and have remained by her side since. Friendships were lost and others strengthened, and some even reignited. Swimming was Monique’s release. It was, and some days is, the one thing she can do where her amputation is not an excuse. Swimming has allowed Monique the freedom of mobility, and a sense of accomplishment. It reduced her pain, both physical and mental and allowed her to reclaim her identity.

Monique’s days start at 4.30am six days a week as she chases her Tokyo 2020 Paralympic dreams. Swimming is what she loves and Monique feels so grateful and lucky to use her body to the best of its ability each day in the water. Monique is studying a Bachelor of Social Work with honours at RMIT. She also volunteers with St Vincent de Paul with their youth program, and is an ambassador with Share the Dignity. To the St Clare’s students Monique says, “Find your passion, believe in your dreams and surround yourself with people who love you, and you love them back.”