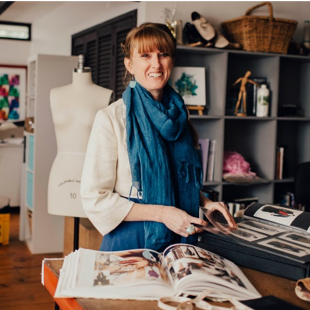 Kelli Donovan went to St Clare’s from 1982 – 1986, her favourite subjects included Fashion and Art. She played netball and has many great memories from playing sport.

After College Kelli went on to study an Associate Diploma of Arts in Fashion for two years at CIT. She started a small business with a friend called MR Ruben, making paisley boxer shorts and pleated shirts for men, and sleep wear and shirts for women.

In 1990 Kelli chose to move to Melbourne to gain more experience in the fashion industry. She was lucky enough to get a fashion design job working for a company who sold children’s wear to Target, Myer, Big W and all the big majors in Australia.

In 1993 Kelli went traveling in Europe and moved to London and to work for a French designer chain store called Morgans. She then moved back to Canberra and worked for Christine White as an assistant. In 1997 Kelli took a job back with her old boss as a head designer in Melbourne. She designed 17 kids ranges for Disney, Warner Bros and sports brands for the department stores. She travelled around the world once or twice a year with her job as a product developer and designer.

In 2006 Kelli along with Sean Watson started Pure Pod in 2006. Pure Pod is an ethical fashion business and are leading pioneers in the sustainable fashion industry. They have sold products all around Australia and the globe. Pure Pod have won many awards and shown their collections in the USA, France, UK, Germany and Hong Kong. They sell to stores, sell direct and sell at some designer markets. The clothing is produced in Australia and in India which is fully Fairtrade FLO & GOTS Certified. They care about how, when, where their clothing is made so they can give their customers an ethical choice in their clothing.

Kelli also runs Slow Fashioned workshops, ethical fashion events and mentors other small business owners in sustainable and ethical fashion and product design. She is the ACT Representative for Fashion Revolution, a mentor for the Global Sisters, a Mum and a netball side kick coach for her daughters team.